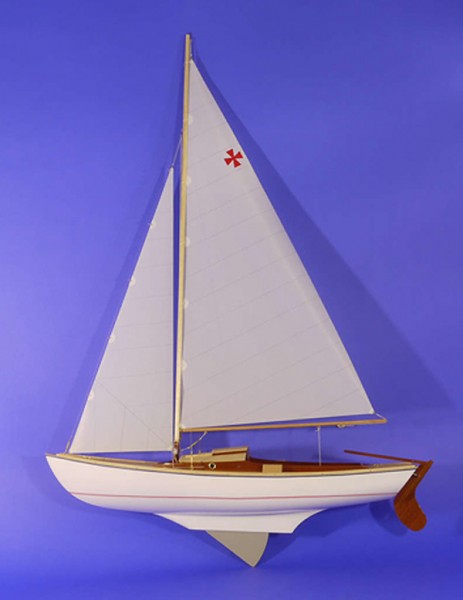 The Hansa dinghy was introduced in 1947 by Henry Rasmussen, founder of the renowned boat and yacht yard Abeking & Rasmussen (A&R) in Lemwerder near Bremen, based on an initial design from 1920. At that time, Henry Rasmussen built a small dinghy called VISKA for two Copenhagen friends, which was used to make longer voyages single-handed in the Scandinavian Baltic region. The particularly good experience with the dinghy gave courage for a new start for the shipyard after the war, as no larger boats were allowed to be built due to occupation regulations. The VISKA design was given more freeboard and draft and, above all, a fixed, lockable cabin superstructure.
Abeking & Rasmussen built this dinghy in large numbers (224 units) under the name "Hansa-Jolle" for about 20 years. Due to her particularly good sailing characteristics, she was soon to be found on many sailing grounds. In 1960 it was recognized as a national class of the DSV. The shipyard A&R, which until then had the monopoly for the construction of the Hansa-Jolle, released the plans for construction by other boatyards.

The designation dinghy is actually not correct, because the Hansa-Jolle is a keel dinghy with its molded ballast keel, its fixed fin and with its draft of 50 cm. The ballast keel of 150 kg and the width of 1.65 meters give the sailboat stability. The Hansa dinghy is unsinkable due to bulkheaded and foam-filled buoyancy tanks, but it is still not capsize-proof.

The 5.85-meter boat was designed as a small and safe cruising boat for inland and coastal areas.
The cabin was small, but there was enough space for 2 berths. The price in 1958 was about DM 7000. The Hansajolle No. 79 (Solveig), with which Rollo Gebhard sailed to the Red Sea in 1960/61, became famous.

Until today the Hansajolle is an active class in the DSV.

The model kit in scale 1:6.5 is designed for beginners, but also for advanced sailors and is largely based on its prototype. The model can be operated either with or without remote control, the installation for an RC system is prepared. The interior consists of precision-cut plywood parts that are glued together into the deep-drawn hull. The deck with printed planks is cut out for a precise fit.

As a light wind sailer, the model, modeled after the original Hansa dinghy, is designed entirely as a classic wooden construction with a high-quality plastic hull. This allows the model builder to easily assemble the model, which is watertight from the start.

For the desire to operate the model in stronger winds, it is necessary to attach a removable additional ballast to the centerboard.

Servos with suitable actuating forces are required for the model.