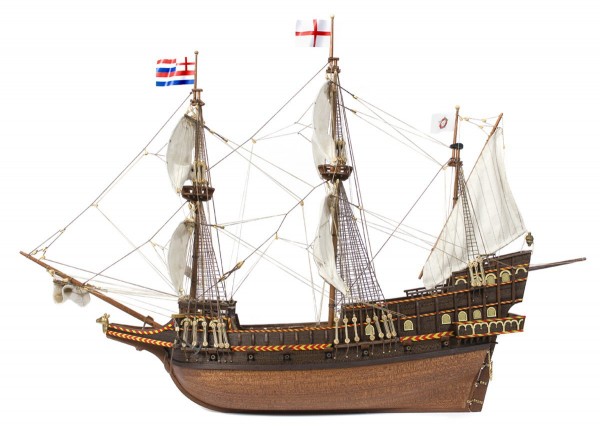 Five galleons set sail from the Port of Plymouth, England, on 13th December 1577, under the command of Francis Drake in his flagship, the Pelican.


Before passing through the Straits of Magellan Drake renamed his ship the Golden Hind, in honour of one of the expeditions patrons, Sir Christopher Hatton, whose coat of arms bore a hind, or female deer, in gold.


The Golden Hind is best known for her circumnavigation of the globe between 1577 and 1580.


After a voyage of some 40.000 miles, in 1580 Drake returned to England laden with treasures and conquered lands. In 1581, Queen Elisabeth 1st personally bestowed a knighthood on Drake on the deck of the Golden Hind.

Spectacular reproduction of the galleon used by the famous Sir Francis Drake.