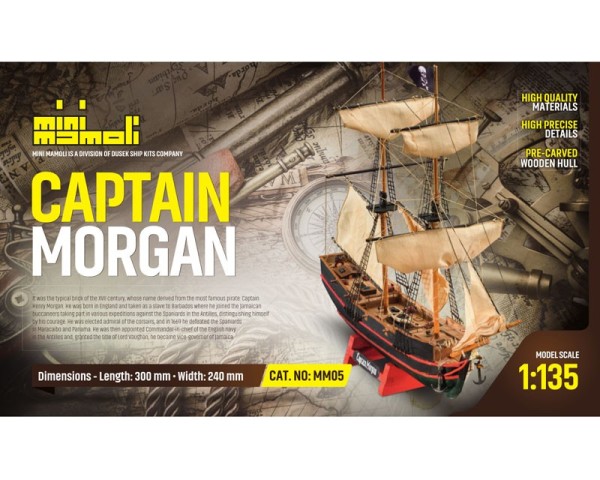 Description Evaluations 0
Description
It was the typical brick of the XVII century, whose name derived from the most famous pirate:... more
Close menu
Product information "Capitain Morgan M 1:135 Mini Mamoli"

It was the typical brick of the XVII century, whose name derived from the most famous pirate: Captain Henry Morgan, who, with the Jamaican buccaneers took part in the various expeditions against the Spaniards in the Antilles distinguishing himself by his courage. He was then appointed Commander-in-chief of the English navy in the Antilles and, granted the title of Lord Vaughan, he became vice-governor of Jamaica.

MAMOLI puts on the market a range of kits that, though in miniature, maintains unchanged the concept of ship building. The models construction is made easier by the moulded hull as well as by the schematisation of the plans in actual size 1:1. A simple reading for the beginners in the ship modelling and a plain work for the boys too. Anyway, in consideration of the exclusive use of a precious material such as wood, the built model is so winning as to be on a level with more difficult productions on less reduced scales.