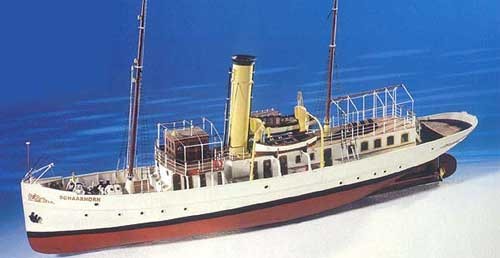 Schaarhörn 1908. History: Commissioned by the Hamburger Senate as sounding and pleasure steamer, the Schaarhörn was built in 1908. She was used chiefly on official occasions and was Hamburg's state yacht. The German Kaiser Wilhelm II was among the notables of the period who sailed on this yacht. From 1925, Cuxhaven became the Schaarhörn's home port. On 30th August 1973, the ship was sold to a buyer in Scotland, who then left the very luxurious Schaarhörn to rust. 1990 saw the foundation of an "Association of Friends of the Steamship Schaarhörn" in Hamburg. The aim of this circle of enthusiasts was to attract sufficient donations to allow the purchase and restoration of the Schaarhörn. Today, the Schaarhörn once more bathes in its former glory, the result of several years of devoted restoration work. Restoration of the ship was carried out according to extensive original building plans still available in the archives. It was necessary to rebuild 30% of the riveted iron hull. The state yacht, now under an official protection order, needs, as previously, a crew of 10. The ship can be chartered for public relations purposes or company outings. It is regarded as the finest steamship in Germany.

The Schaarhörn model recreates the original ship with a maximum of authenticity, using the plans and many photos of the vessel. In selecting materials, economy has played has played as little a role as with the original ship. The fine-detail of the glass fiber reinforced plastic faithfully reproduces all the riveting. The wooden parts of the superstructure have been cut to fit precisely using CNC control. For a maximum of authenticity window frames, details on the bulwark and many parts have been etched in sheet brass in a multilayer technique. Over 850 fittings in carefully molded soft metal ensure that the model is absolutely true-to-scale down to the last stanchion and all its attachments. The wooden deck and other visible wooden parts are pre-imprinted. Putting this model together is something for the experienced model-builder. For this narrow hull, installing a steam engine requires an additional keel, not included in the kit.