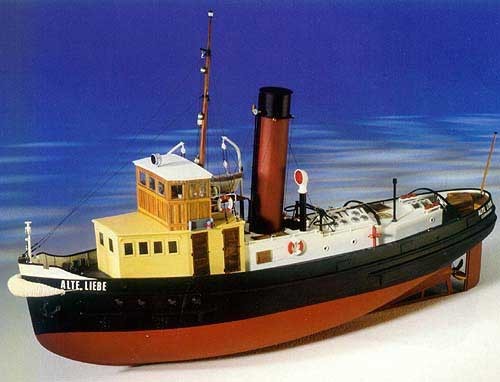 German tug from 1931 For the best part of thirty years, up until 1960, the shipping company tug "Alte Liebe" was part of the everyday picture of the port of Cuxhaven. Under steam around the clock, she was used as a pilot-boat, tug for everyday harbor service, auxiliary emergency vessel, fire-tug and salvage vessel. Her triple expansion steam engine developed 360 PS, while the crew consisted of a captain, engineer, 3 stokers and 6 sailors.

The model has been reconstructed from original drawings and contemporary photographs of the interior, with the involvement of erstwhile crew members. The fully-removable superstructure of Alte Liebe is sufficiently wide to allow easy access to the interior of the hull. Installation of a steam engine in the large-volume hull is really easy. The kit is generously equipped: a magnificent, full-detail glass fiber reinforced hull, a punched wooden deck, plus a set of cast-metal fittings including all imaginable details. Even the parts for the interior of the bridge are included in the kit. A construction drawing and building instructions round off this attractive kit.