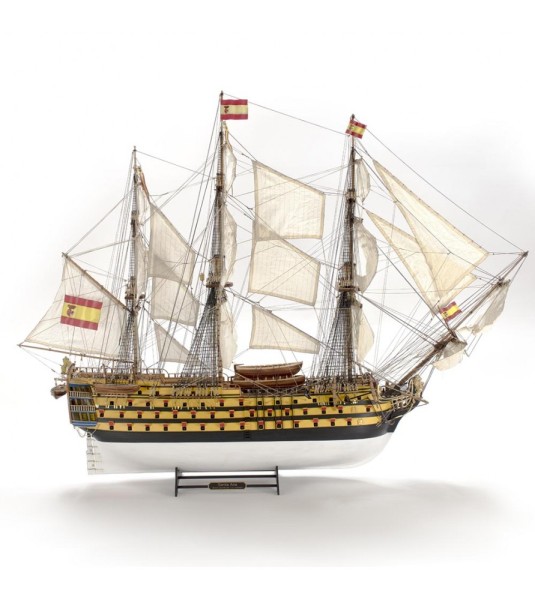 Ship of the line of the Spanish Armada "Santa Ana " in the state of 1805 - Kit
Limited edition !


The ship Santa Ana was launched on 28 September 1784 in El Ferrol (Spain). She was the prototype of a series of 8 ships and had 112 guns distributed on 3 bridges. In the battle of Trafalgar (1805) she was in action against the English "Royal Sovereign". After several hours of fighting, without masts, with almost 100 dead, and surrounded by the enemy, the crew surrendered under the command of Captain José Ramón de Gardoqui. Despite the great storm after the battle, the crew managed to bring the Santa Ana safely to Cadiz.

The manufacturer of the Artesania Latina kit takes a new approach to the planking of the hull in this model. Exotic precious woods were partially replaced by lime wood to save resources and protect the environment. The model can be built in a very classical way without painting the hull. The light lime wood planks are darkened with stain in the colors of Sapelli and Walnut. For this construction method, thin strips of Sapelli veneer are included in the set for a second planking. Also in the instructions is the color scheme from 1805 , where the hull must be completely colored. The underwater area of the ship was covered with copper plates- for this finishing stage a set is in preparation.


Like many other ships, the Santa Ana evolved more or less during her years of service. The composition of the artillery in recent years was different from that
than when she was in service. Several guns located on the forecastle and the quarterdeck were replaced by carronades of other caliber. This new version of the model includes these carronades to represent the ship in the in the Battle of Trafalgar. In addition to this change, the rest of the model's cannons have also been revised, which were slightly oversized in the previous version of the kit. In this kit, special emphasis was placed on a detailed realization of the deck equipment.


The kit contains all the necessary parts to build the model, all wooden parts are precisely prefabricated in the laser cut process. The kit contains countless perfectly reproduced small parts and fittings made of metal and wood. Particularly fine details are made in the brass etching process. All hardware parts are clearly arranged in sorting boxes, so that no part gets lost during the building process. The sails are already sewn. A model stand and a small model plate complete the kit.

The kit is not suitable for beginners !