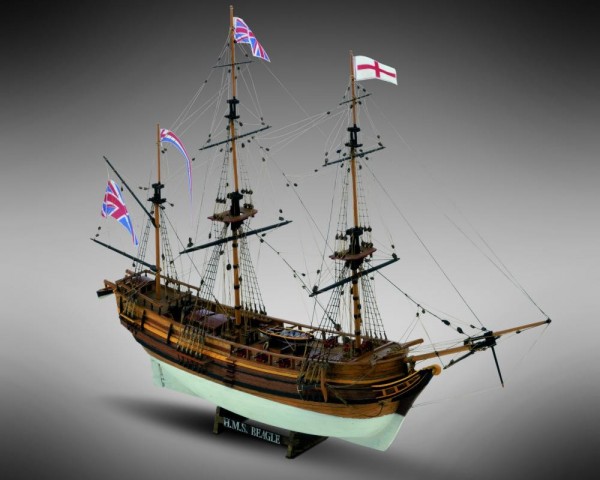 The H.M. S. BEAGLE was built around 1817 Used at first as a coasting vessel, it was subsequently equipped for the scientific observations which led it through the Atlantic and the Pacific Oceans to the most distant lands. On board, classified in the duty turns of the ship as naturalist, was one of the most famous scientists, Charles Darwin. A mizzen-mast was added, so that the ship could be more easily steered along the coral-reefs of the Pacific islands, thus transforming the Beagle into a barque (in consideration of the peaceful aims of the expeditions the guns were removed).

27th December 1831 - The Beagle sailed from Plymouth - England for a long exploration voyage. Route: The Azores - the Islands of Green Cape - Brazil. From Brazil, along the coasts of Patagonia, rounding the terrible Cape Horn as far as Chile. On the 13th of January 1833, the Beagle faced a furious storm. Its solid structures stood the force of the sea and none of the crew suffered any serious injury. Itreached 'Las islas enchantadas', which are known today as the Galapagos, and afterwards continued sailing towards Tahiti, New Zealand and Australia; at last, rounding the Cape of Good Hope, it headed for England, where it arrived on the 2nd of October 1836.

Through various experiences and acute observations, Darwin's mind threw light on the mystery surrounding the development of life on earth and slowly his famous theory of evolution took shape. After twenty years of tireless work, Darwin published 'The Origin of the Species' in November 1859 and was subsequently accused of heresy. His theory of evolution was refused for many years. Gradually an ever increasing number of scientists sided with Darwin and today the whole world of science recognizes him as one of the most famous minds.