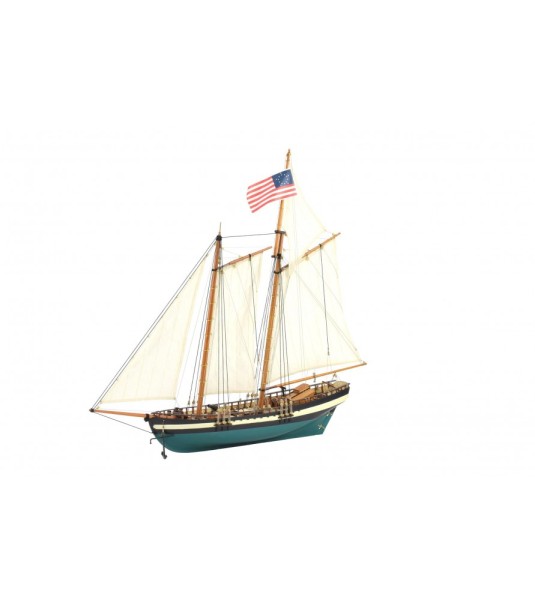 The Virginia is a type of ship known as a 'schooner'. We are at the beginning of the 19th century. The United States undertook at that time the construction of small ships rigged in schooners, obtaining vessels of great maneuverability and elegance.

These schooners would be the seed of the later US Coast Guard, they had the mission of enforcing the new import and customs laws. The fast schooner Virginia was planned in the year 1819 and was launched in the same year. Equipped with a central rotating carronade and light weapons, due to its great speed, it was a schooner destined to control the US maritime borders on interception and pursuit missions of other ships that tried to reach the American coasts.

Build the wooden ship model at 1:41 scale of Virginia American schooner, completely redesigned in 2022 for a better building experience. Aimed at beginners modelers and anyone who wants to build this beautiful miniature replica. Once it is built, the wooden model of the American schooner called Virginia

The kit contains all the necessary parts to build the model, all wooden parts are precisely prefabricated in the laser cut process. All fitting parts are clearly arranged in a sorting box. The sails are already sewn.As a gift bonus, the wooden ship model of the Virginia American Schooner includes a wooden exhibition base and a nameplate of the ship.

All construction plans, instructions, many photos and video tutorials to help with building are included on a DVD! NO printed instructions in the set.