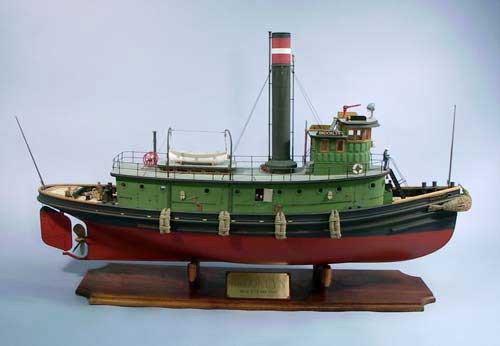 The Brooklyn was built in 1910 and owned by the New York Dock Co. Steam powered all her career she was inauspiciously sold for scrap in 1960. She was one of many railroad tugs, designed to transfer railroad cars from one side of New York to the other on barges known as car floats. Railroad tugs almost always towed barges alongside, with one car floating on each side, hence the heavy guards and the use of single posts instead of H-bitts. Railroad tugs were characterized by long houses because there was no need of towing space aft. The Dumas kit of the Brooklyn is designed to give you the salty appearance of the original boat. Not just your average tug, the Brooklyn has the characteristics that set the early tugs apart. You get the new white ABS hull , all the parts to build the conventional die cut superstructure, and enough detail (laser cut parts, lots of castings, brass railings, etc.) to keep you busy through many a long winter night. If you are one of many who admire the pugnacious sprit of tug boats then this one is for you. Another classic model from The Model Boat People.