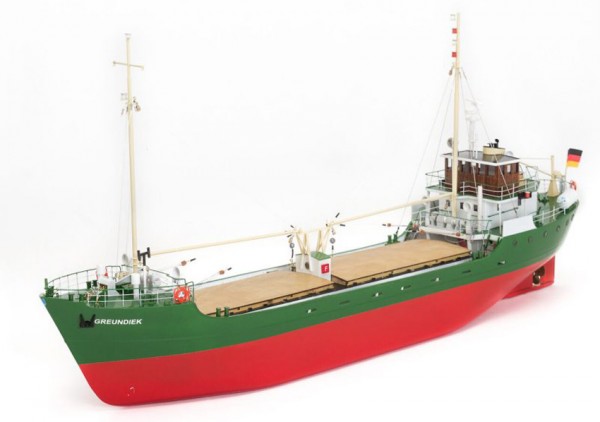 The Greundiek was laid down in 1949 as "Hermann-Hans" at the Rickmers shipyard in Bremerhaven; the launch was in January 1950. The ship was one of the first ships built in Germany after World War II and one of the first ever civilian ships of all-welded construction. In 1965, the "Hermann-Hans" was sold to Henry Dölling, who renamed the ship "Rita Dölling" after his wife.

In 1986, the district of Stade purchased the ship for the Grünendeich maritime school, which conducted instructional units on board for training as a ship's mechanic. In 1994, the association Alter Hafen Stade e. V. bought the Greundiek from the district of Stade. After initial repair work in the dock of the Norderwerft shipyard in Hamburg, the ship was given its berth in the port of Stade on April 22 of that year. There it was restored until 2000 and brought back to a running condition. The ship, which has largely been preserved in its original condition, is listed as a technical cultural monument in Lower Saxony's register of movable cultural monuments. At the end of January 2003, the Verein Alter Hafen Stade e. V. received the state prize of the Lower Saxony Savings Bank Foundation for Monument Preservation for the restoration of the ship. The Verein Alter Hafen Stade e.V. has been maintaining and operating this unique museum ship with its volunteer members since 1994. The ship is licensed for coastal navigation. Today, the MS Greundiek is used for events of all kinds and for public trips on the Elbe and in the Baltic Sea region. (Source: greundiek.de)

The model was developed with the help of all available drawings and many pictures. The kit consists of a large, stable ABS hull with milled out openings for portholes and scuppers. The deck and complete superstructure is made from laser cut parts of ABS and wood. All parts are laser cut to fit accurately. The many hardware parts complete the appearance of the Greundiek.

Although the original was used as a model for the kit and its equipment, the model also offers enough possibilities to create your own version of the Greundiek.