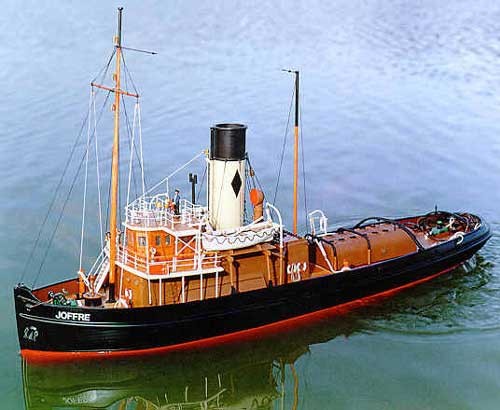 Steam Tug The Joffre was built by the Ardrossan Dry Dock & Shipbuilding Co. in 1916 and operated in Newcastle. She was used as a tug along the coast and on the river Tyne. Unusual for the period were two tug hooks, the aft one being used for smaller tug operations. The Joffre kit includes a glass fiber reinforced hull and CNC-cut wooden parts for deck and superstructure. These new pre-milled parts considerably improve fitting and make assembly easier. The set of fittings includes more than 300 cast-metal parts, which give the model a maximum of authenticity. A crew of three figures and a dog are also included. An extensive construction drawing with detailed instructions and detail sketches are also included.