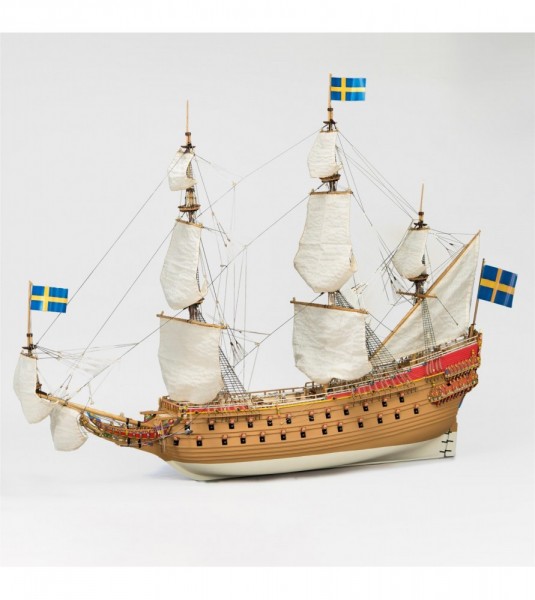 We are closed from 23 July to 6 August. During this time no shipping, no service, no answering of mails !

Description Evaluations 0
Description
The Wasa is a part of Swedish, European and world naval history in both a positive and negative... more
Close menu
Product information "Galeon Wasa"

The Wasa is a part of Swedish, European and world naval history in both a positive and negative sense. This warship with 64 bronze guns was launched in 1628 (17th century) after its construction was completed with more than a thousand felled oak trees ordered by King Gustav II to fight in the Thirty Years' War.

The anecdote about the Wasa is that it was sunk in Stockholm harbour as the flagship of the Swedish Empire.

It was the most powerful ship of the time, only surpassed a century and a half later by the USS Constitution, one of the first American frigates. The WASA sailed with a weight of 1,200 tons and a sail area of 1,150 m2 (80 tons).

One of the strongest points of this model is its great attention to detail, which is particularly reflected in the many sculptures at the stern of the ship, divided into five parts: the lions with the shield, the human faces with emotions, the group of the king , the angels and the servants and the mermaids or sea creatures. He had 700 other sculptures depicting heroes of the Bible, Roman emperors and Greek gods with striking colours.

The Wasa was rescued in 1961, after three hundred years in the deep, and converted into a museum ship that has since been on display on the island of Djurgarden in Stockholm, Sweden.

The kit is the first premium kit of the manufacturer Artesania Latina. The construction was created completely in 3D and thus allows an absolutely accurate fit of the parts. All wooden parts are precisely prefabricated in the laser cut process. Planks must of course be adjusted by yourself. All fittings are completely made of metal and some of them are especially detailed and produced in an etching process. The sails are already sewn.  A set of metal cast figures for an even more interesting representation of the model is included. German instructions are only available on DVD's with over 2000 photos and video documentation for particularly complicated building sections. Alternatively, the instructions are also available as a download.