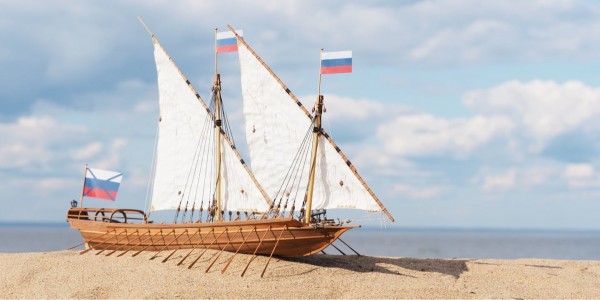 We are closed from 23 July to 6 August. During this time no shipping, no service, no answering of mails !

Asov Scampaway - Russian galley that took part in the conquest of the Turkish fortress of Azov under Peter I in 1696. Rur Russian fleet included 23 two-masted galleys built on the Dutch model. The construction of galleys for the Baltic Fleet began at the Olonets shipyard, founded in 1703, and since 1712 - at the shipyard in St. Petersburg.
Taking into account the peculiarities of the Baltic area of operation (archipelago, shallow water, unsteady winds), Peter I created an archipelago rowing fleet, the basis of which was formed by half-galleys or scampaveys (Italian scappare - to disappear and via - away). They were 36.6 - 39.6 m long, 4.8-5.5 m wide and had a shallow draft. These ships were single- and double-masted with diagonal sails, had up to 18 pairs of oars and could carry up to 200 men. Their armament consisted of three to six 12-pounder guns and 16-20 basses (1-2-pounder falcons).
Native galleys and scampawei were better suited for coastal operations than large Swedish sailing ships. On 27 July 1714, the Russian fleet of 99 galleys and half-galleys under the command of General Admiral Count F.M. Apraksin (vanguard under the command of Peter I) won the first great naval victory over the Swedes at the Battle of Gangut, and on 27 July 1720, 66 rowing ships under the command of General M.M. Golitsyn won a no less glorious victory at Grengam Island.
Beautiful and interesting model with high elaboration of details that will appeal to experienced ship modellers. Created from historical drawings, it is an exact and faithful copy of the ship from the time of Peter the Great.
The assembly of the model is accompanied by detailed text and photo instructions in Russian. There is NO German translation.
The planking of the hull is made of pear wood, the planks are already cut out by laser in the required shape. The deck consists of solid plates on which the deck layout is engraved. Brass plates with photo etching, three cast blackened cannons and anchors, ready made sails, threads for rigging, flags and pennants, brass wire in various thicknesses are included in the kit.
The kit is completed by a stand with the name of the ship.