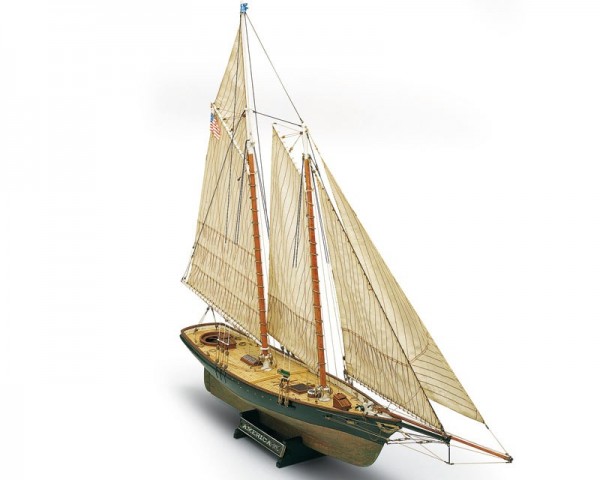 The schooner America was designed by George Steers and built in William Brown's shipyard in 1851. Its name is still the most important and celebrated in the history of the world yachting.

America, under Dick Brown's command, pilot from New York, set out for England in June 1851 to take part in the regatta which was to be held on the 22nd of August around the Isle of Wight, without any compensation for difference of tonnage or rigging. The prize offered was a 100 guineas cup. America carried off an overwhelming victory over the English squadron. Famous are the words which the signalman transmitted to Queen Victoria and which passed into the history of the UnitedStates: 'America first, your Majesty. There is no second'.

America presented remarkable novelties in the form of the hull, above all as far as the water lines and the main section were concerned, the latter much pulled
back in comparison with the hulls of that time. Besides It had a low draught, refined lines, a light displacement and a new cut of sails, remarkably thinner and made of cotton fabric. America had a long history and was pulled down in 1946. Only the carved eagle which it had on the poop survives at the New York Yacht Club. The 100 guineas cup became 'America's Cup' and still gives the name to the most important regatta in the world.