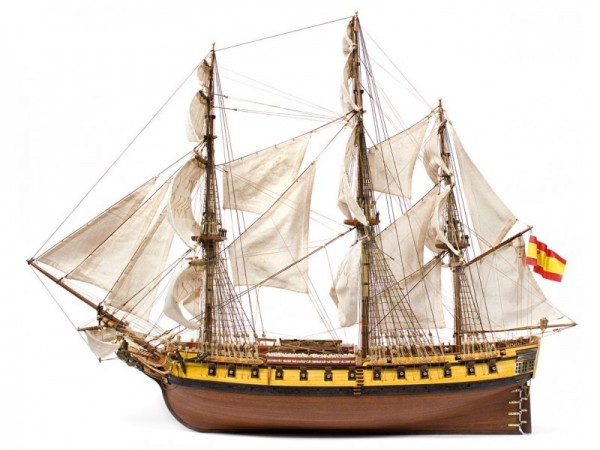 The frigate "Nuestra Señora de las Mercedes" was built in 1788 in Havana owned by the Spanish Royal Navy and equipped with 34 cannons.
Having left Montevideo on August 9, 1804 he was loaded with gold, silver, copper, tin, wool vicuna, Peruvian bark and cinnamon.

On October 5, 1804 takes place the Battle of Cape Santa Maria, where a projectile of the English fleet, hit the Santa Barbara, causing their tragic and fast sinking.

The company Odyssey, using a modern and sensitive sonar discovered in May 2007 in the Gulf of Cadiz, the wreck of the frigate.

Using an underwater robot controlled from the surface and operating at about 1,100 meters deep recover the sunken treasure of Mercedes.

500,000 silver coins and gold. (Pieces of eight and escudos minted in Lima, Peru in 1803) is the largest sunken treasure has been recovered to date.

Currently, the National Archaeological Museum in Cartagena, displays some of the recovered patrimony of the frigate.

Enjoy the historical spanish frigate, with the assembling the ship model of the Nuestra Señora de las Mercedes.
The kit is ready to mount with a high quality of assembling pieces.