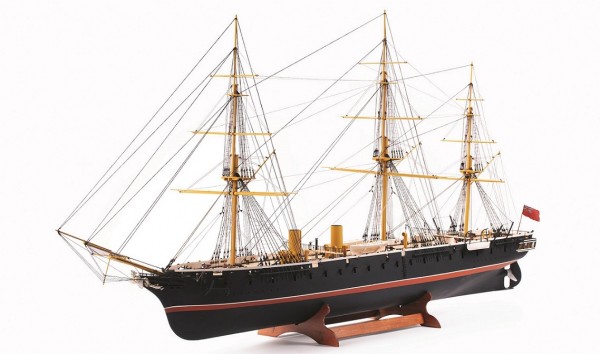 Warrior was designed and built in response to an aggressive French shipbuilding programme which saw the introduction of the first iron-clad warship La Gloire designed by the brilliant naval architect Stanislas Charles Henri Dupuy de Lome. Determined to see off this challenge to the supremacy of the Royal Navy the then First Lord of the Admiralty, Sir John Somerset Pakington, determined to build a ship so superior in terms of quality, speed, size, armament and armour that it would be inconceivable to France that she could take Britain on in a sea battle. When commissioned by Captain the Hon. Arthur Auckland Leopold Pedro Cochrane, on August 1st 1861, Warrior was the largest warship in the world, at 9,210 tons displacement she was fully 60% larger than La Gloire. The ship underwent minor modifications after a sea trial. In June 1862, she started active service in the Channel Squadron, patrolling coastal waters and sailing to Lisbon and Gibraltar. Having introduced a revolution in naval architecture, by 1864 Warrior was superseded by faster designs, with bigger guns and thicker armour. Source: HMS Warrior
Building Instructions are in: