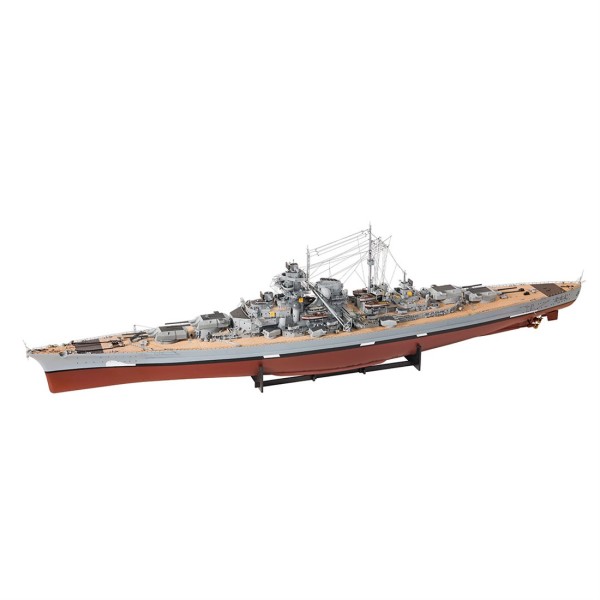 Description Evaluations 0
Description
The Bismarck was a battleship of the German navy and, together with her sister ship Tirpitz,... more
Close menu
Product information "Battleship Bismarck 1941"

The Bismarck was a battleship of the German navy and, together with her sister ship Tirpitz, formed the Bismarck class. At the time of her commissioning in August 1940 under the command of Captain Ernst Lindemann, she was considered the largest and most powerful battleship in the world.

The Bismarck was the type ship of the Bismarck class. The ship was 250.5 metres long and 36 metres wide, with a maximum draught of 9.9 metres. The ship's dimensions were chosen to ensure the usability of the Kaiser Wilhelm Canal and the Wilhelmshaven naval base.

On 27 May 1941, after battles with the British Navy, the heavily damaged Bismarck was sunk by order of the First Officer, Frigate Captain Oels. A total of 2104 men of the crew of over 2200 were killed in the sinking.

On 8 June 1989, the wreck of the Bismarck was discovered by the US deep-sea researcher Robert Ballard at a depth of 4800 metres. The exact location of the wreck, which is now owned by the Federal Republic of Germany, is kept secret to protect the naval war grave from grave robbers.

Amati already has many years of experience with the model of the Bismarck through its production for a publishing subscription. Now Amati has again succeeded in significantly improving the construction with even finer details. This model is probably unsurpassed in richness of detail. The hull is made of wood and the parts are precisely laser-cut. For the many details countless etched parts plates with 2266 parts and many more moulded parts are used.

The Bismarck kit is designed as a stand-alone kit. Due to the generous space in the hull and removable superstructures, this can be very easily built into an RC model.